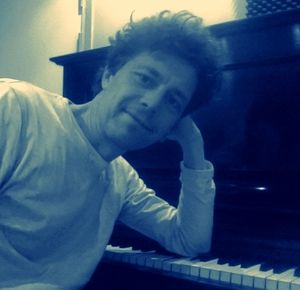 Caleb is a pianist, composer and producer. Formerly based in London, he has lived and worked in Copenhagen since 2010.

He has over 25 years experience playing for ballet and contemporary dance, and has worked extensively with companies such as Rambert, Matthew Bourne's New Adventures, English National Ballet and Michael Clarke Company (all in London), and with Danish Dance Theatre (in Copenhagen) and Skånes Dansteater (in Malmö).

In addition he performed in and was musical director for a number of fringe shows in London and Edinburgh, accompanied singers and has also worked in Copenhagen as a repetiteur (rehearsal pianist) and performer for shows such as Into the Woods and Oliver!

He has composed music for dance, film, theatre and art events and has played live with a diverse style of bands, including acid jazz, gypsy swing and cumbia

Most recently he has been exploring the present moment through piano improvisations. Listening for the silence behind the music.